I love to hear how people run their game or their character at the table and recently read Dixon Trimline’s post, The One-Page Character Sheet, on Critical Hits. Last year I played a few games of D&D Encounters and quickly found that I really liked the half-page, two-sided character sheet (card) the pre-generated characters came on. As I am always looking for ways to tweak the bits in my game, I sat down to recreate the same look and feel in a full-page, custom character sheet for one of my players.

I set out to create a single-page sheet for a heroic tier character, but was ultimately unable to get the aesthetic I was going for and keep it all on one page so I settled on front & back. I’m sure this could be condensed to one page if I gave up some artwork… but what’s the fun in that? Obviously, continuous care and feeding would be required here as the character levels up and gains more powers and magic items. 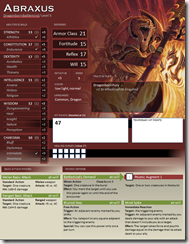 I used Microsoft PowerPoint because it provided a pretty good mix of control over the layout of components on the page and ease of update. It’s also installed on every PC I sit down in front of. 🙂

Clearly one’s character sheet is an intensely personal choice; some love cards cut out and slid into protectors, some play with the CB sheet as printed, and others spend time to create a custom view of their in-game alter ego. It would be really nice if there was a template-friendly character export from the CB that could be fed through a style sheet transformation to generate custom sheets.

Here’s what I propose: In addition to the full XML export the CB provides today, I’d love to see a simplified XML snapshot that just saves the attributes that define my character right now (abilities, feats, skills, powers, etc.). If such a thing was available, I have no doubt that we would see a wide variety of CSS templates, Excel files, and other custom sheet generators pop up on the Internet. I would think that it would also offload the WotC team from developing new character sheet options for the CM print dialog, while maintaining control over the actual character generation function.